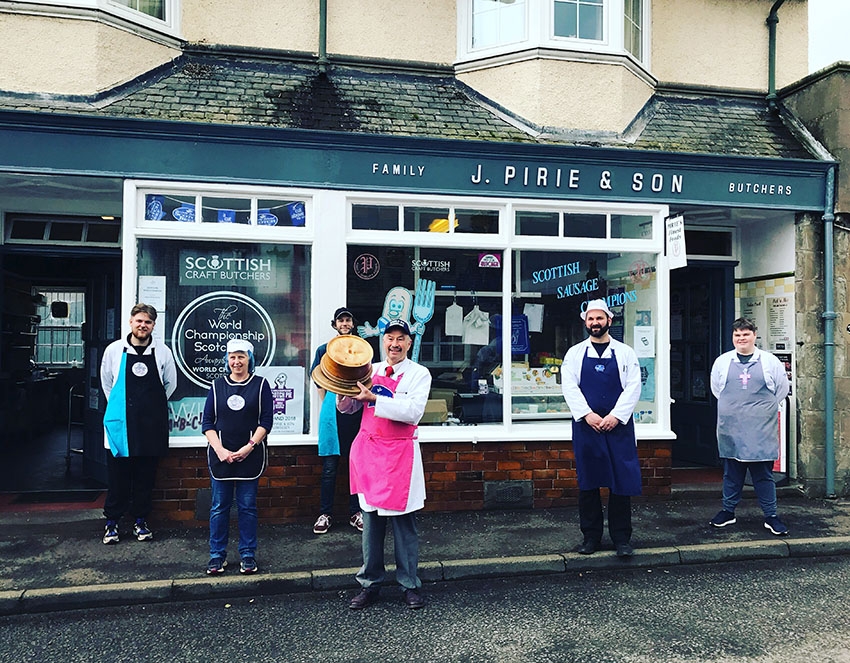 Alan Pirie with his team at James Pirie & Son

James Pirie & Son of Newtyle have been crowned as the first ever World Scotch Pie Champion of Champions.

James Pirie & Son, who won the competition in 2020 and in 2018 with their iconic Scotch Pie, were told the amazing news outside their shop in Newtyle today, 12th May, that their pies have once again reached the peak of perfection and were officially the best in the world.

Alan Pirie from James Pirie & Son said, "I was delighted to have won the competition twice but to have been judged alongside literally the best pies in the land and to have come out on top is beyond my wildest dreams. I really do make the best Scotch Pies in the world. This is just fantastic news and will be a huge boost to the business after a year of continuing to serve our community with fresh produce through difficult circumstances for us all."

Scottish Bakers, the trade association that supports the bakery trade in Scotland, and which each year organises The World Championship Scotch Pie Awards, announced late last year that the competition would run this year, but with a slightly different format for 2021 only!

It was decided to bring back all the past winners and to pit their winning pies against each other in a head to head, and the roll call was impressive with entries from:

"It is important to say that each and every pie that was entered on judging day is a winning pie having taken the title in recent years," said Scottish Bakers Chief Executive, Alasdair Smith. "So the judges really were spoilt for choice on judging day. But head judge Ian Nelson and Paul Long from our partner sponsor BAKO Northern and Scotland took their time and gave judging their all. And it was a close run thing let me tell you, but the best pie won out on the day."

TV presenter Carol Smillie who has long hosted the awards ceremony said "I am so pleased to hear that Alan and Norma have taken the title and that they can truly call themselves the Champion of Champions, well done to them."

Paul Long, Managing Director of sponsors BAKO Northern and Scotland said "I have judged this competition over many years and I have to say the standard of entries from past winners did not disappoint so selecting Pirie & Sons as the best of the best was a tough job but their pie did indeed stand out."

Event partner Scottish Craft Butchers' Executive Manager Gordon King said, "We were delighted to be involved in the champion of champions scotch pie evaluation and to hear that Piries have taken the title is great news. In these difficult times it is more important than ever to recognise the traditional skills and hard work that goes in to develop and produce a truly iconic Scottish product."

The competition, which has run for 22 years, highlights the fantastic pastry products that bakers and butchers create every day from the humblest of ingredients. Recognising the best in this way rewards excellence and raises the bar in the industry.