The UK’s Favourite Pie Revealed and Scotland should be proud! 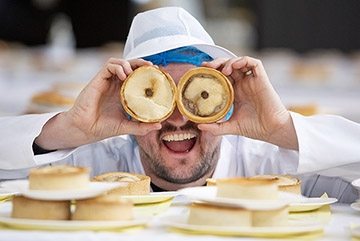 For the UK's 2021 National Pie Week (1st-7th March), the team at Eat Great Meat delved into the pies that the UK is most interested in online. They compiled data on people searching for pie types, takeaways and recipes to reveal the most popular pies across the UK over the past year.

And Scottish Bakers, the association which manages the World Scotch Pie Championships each year as well as representing the interests of bakers large and small in Scotland, are delighted to confirm that the iconic Scotch Pie is the most searched for pie in England, Wales and of course Scotland!

The research found that:

The findings were arrived at following analysis, over a year, of UK searches for different pies in Google Keywords and Trends, determined that Scotch Pies are the UK's favourite, followed by vegan pie and vegetarian cottage pie.
The Scotch Pie received 385,497 searches or 16.9% of total searches for pie across the UK over the past 12 months. Originating in Scotland, this pie traditionally contains mutton but commonly contains beef, particularly when sold across England. Typically, the Scotch Pie is sold at football games with a cup of Bovril - and is a firm fan favourite.
With the launch of the first vegan scotch pie last year and the annual World Championship Scotch Pie Awards, organised by Scottish Bakers, set to continue in 2021, this classic pie should continue to rise in popularity.

Scottish Bakers Chief Executive, Alasdair Smith. "This result comes as absolutely no surprise to us at Scottish Bakers. We have long known that this iconic Scottish superstar pie has a worldwide following but to have its premier position confirmed is proof of the UK's love for tradition and quality baking. We would urge anyone based in Scotland who has searched for a Scotch Pie recently to pop down to their local baker or butcher and ask to try one for themselves, they are always in stock freshly made each day. If you live elsewhere in the UK, why not ask in your local shops if they would consider adding them to their product range, we promise you a real treat."