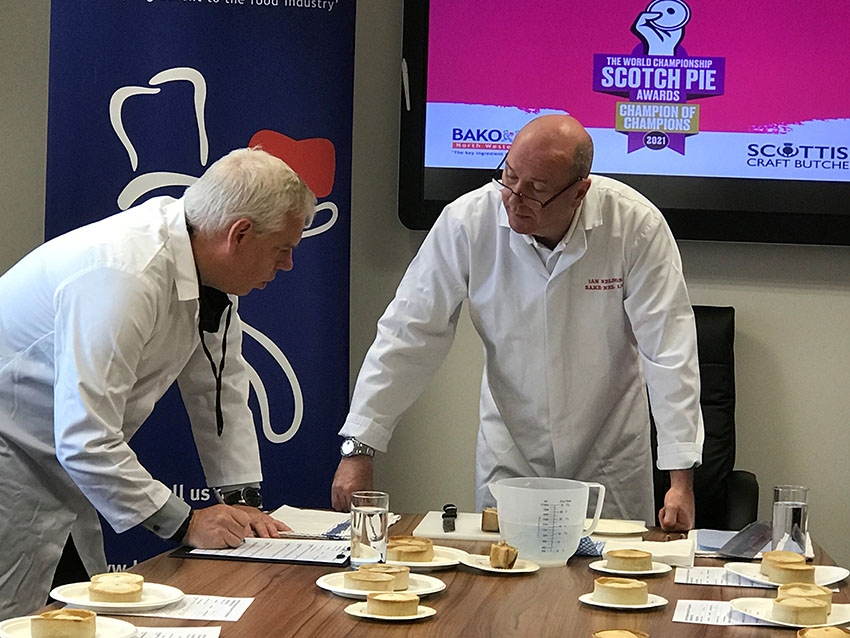 A total of 15 bakers and butchers from across Scotland, all of whom have previously held the title, were eligible to take-part in this one-off Champion of Champions competition created to allow some of Scotland's best food artisans to shine in what has been a tough year all round for so many.

All the mouth-watering pies were put to a blind taste-off at Bakers House, Scottish Bakers Dunfermline HQ, by two pie experts, Head Judge Ian Nelson and Paul Long, Managing Director of BAKO Northern and Scotland who spent many hours putting the pastry perfections through their paces to determine which pie looked and tasted the best.

Scottish Bakers, the trade association that supports the bakery trade in Scotland and which each year organises The World Championship Scotch Pie Awards, announced late last year that the competition will run this year, but with a slightly different format for 2021 only!

Each year, the title is hard fought by butchers and bakers throughout Scotland and beyond but with COVID restrictions currently preventing gatherings, the 2021 competition is being managed a little differently.

"Restrictions in place to combat COVID meant that our annual November judging day was not possible and neither was the awards lunch in January," said Scottish Bakers Chief Executive, Alasdair Smith. "So, we have taken the decision to run the competition, but with some changes for this year to ensure the Awards retain their place in the annual calendar.

"We invited all previous World Scotch Pie Champions to enter their winning Scotch Pie into a 2021 Champions of Champions competition. They were asked to submit their pies for a socially distanced judging which was held blind to ensure each pie was judged on its own merits."

Judging took place on 4th May 2021 with the Champion of Champions being announced on 12th May although everything is subject to possible change based on future changes to COVID measures.

Judge Paul Long, Managing Director of BAKO Northern and Scotland said "I have judged this competition over many years and I have to say the standard of entries from past winners did not disappoint so selecting the best was a tough job but one pie did indeed stand out from the crowd."

Executive Manager of competition partners Scottish Craft Butchers Gordon King said, "Scottish Craft Butchers are delighted to support the champion of champions scotch pie evaluation. In these difficult times it is more important than ever to recognise the traditional skills and hard work that goes in to develop and produce a truly iconic Scottish product. We look forward to seeing the past champions of butchers, bakers and all pie makers, do battle to see who will be crowed the best of the best. Good luck to all the entrants."

"We hope you will join with us in wishing the past winners all the best in going head to head with each other to be crowned Champion of Champions for 2021", concluded Alasdair.
The competition, which has run for 22 years, highlights the fantastic pastry products that bakers and butchers create every day from the humblest of ingredients. Recognising the best in this way rewards excellence and raises the bar in the industry.